Has rugby become a sport for the viewer rather than the player?

AS SPORT stops for COVID-19 and we wonder when it will return, the Observatory for Sport in Scotland has taken a dive into this year’s sports data to analyse trends in 2019-20. In this first think piece of a new series, OSS researcher TOM ROWE turns the spotlight on rugby and asks why the oval-ball game is becoming more of a spectator sport than a participant one.

THE RUGBY World Cup 2019 propelled the oval ball into a new stratosphere as a viewer sport, smashing global broadcast records and inspiring new audiences, especially in Asia. Despite Scotland’s disappointing pool exit, we also got in on the act of rising TV audiences, continuing to this month’s Guinness Six Nations victory against France. However, there is evidence to suggest that, whilst rugby’s popularity as a viewer sport may be growing both globally and in the United Kingdom, participation rates in traditional rugby-playing countries including Scotland are stagnating or decreasing. Why is this? And what can we do to translate interest in the game into participation?

It now seems like aeons ago, after the global COVID-19 outbreak, but it’s worth reminding ourselves that despite great excitement surrounding a resurgent Grand Slam-chasing French team, Scotland emerged victorious just over two weeks ago at BT Murrayfield after one of the most impressive displays from Gregor Townsend’s men. It helped to lay the ghost of a disappointing World Cup run which saw Scotland knocked out of the group stages after an unexpected defeat to hosts Japan, and as with any stirring Scotland win there was hope that this revitalisation of the national team could translate into fresh enthusiasm for rugby across the country.

It could well do with an injection of enthusiasm as concerns grow around declining participation rates. Scottish Rugby announced its assessment of registered players in 2019 to be a total of 36,207. There has been much scepticism of these figures, which include children and women – areas where rugby has shown real growth – but even taking them at face value, in 2016, World Rugby calculated the number of registered players to be 49,625, so marking a fall of about 27% in three years.

Scottish Rugby’s Director of Rugby Development Sheila Begbie insists that the SRU’s adoption of a new data collection system and the unreliability of previous data makes it difficult to compare, stating: “I wouldn’t say it’s a massive decline… we actually don’t know realistically what the numbers were before”. Former Scotland Grand Slam hero Iain Milne wrote an article last year suggesting there were realistically less than 5,000 adult male players playing regularly, after his own count of Scottish leagues and teams in action.

So, scepticism abounds inside and outside Murrayfield around participation figures, but there are broader trends suggesting that participation in Scotland is declining. A 2019 OSS report analysing Scottish Household Survey figures revealed declining participation across traditional organised sports, including rugby, which were being overtaken by fitness-related activities like weight training and aerobics. Similarly, global trends reveal how participation in rugby is generally declining despite its continued popularity as a spectator sport in these countries. And that is where the intrigue lies: the sport appears to be booming for TV viewers. 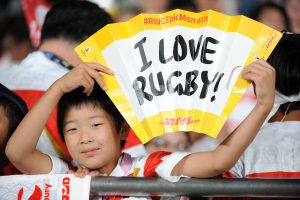 The Japan RWC paints a glowing picture for the future development of the sport, setting new broadcasting records and inspiring new audiences. There were more than 857 million viewers around the world, an increase of 26 percent from the previous tournament in England. A significant portion of these viewers came from emergent markets. Inspired by the impressive performances of their team, host nation Japan contributed just over half of all global viewing with a cumulative audience of 425 million, five times what it was for England 2015. High viewing figures were also driven by growing number of younger and female fans in emerging markets such as India, Germany and across Asia. These were not the only success story, as viewing figures in traditional rugby countries such as the UK were also up. England’s strong cup run resulted in a peak live audience of 12.8 million for the final against South Africa, making it the most watched sports event of the year in the UK. 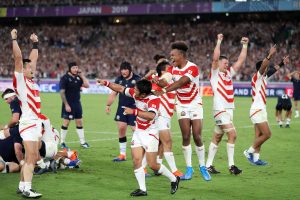 Japan celebrate a first victory over Scotland at RWC 2019 in Yokohama. Picture by David Gibson/Fotosport UK.

And Scotland featured in the records too. The most watched match on Japanese TV was the hosts’ incredible Pool A encounter with Scotland in Yokohama – watched by a domestic peak record rugby TV audience of 54.8 million, which was more than the FIFA 2002 World Cup Final.

Farhad Divecha, managing director of AccuraCast, made the following statement: “Whilst it’s great to see new interest from countries who aren’t historically big in rugby, its important to understand the surge in digital engagement largely stems from renewed interest within countries who have typically followed the sport.”

This suggests interest in the sport is hardly diminishing, creating an optimistic outlook for its future growth and development across the globe. However, statistics released by World Rugby comparing global participation from 2016 to 2018 show worrying trends on the field. Although rugby’s global popularity appears to be increasing, with more countries around the world having increased participation, the number of players in traditional countries, including England, Scotland, Australia and New Zealand appear to be either stagnating or declining.

Figure 1 shows the number of registered rugby players by continent. It tells us that whilst participation is increasing in Africa and Asia, Europe is seeing an overall decline.