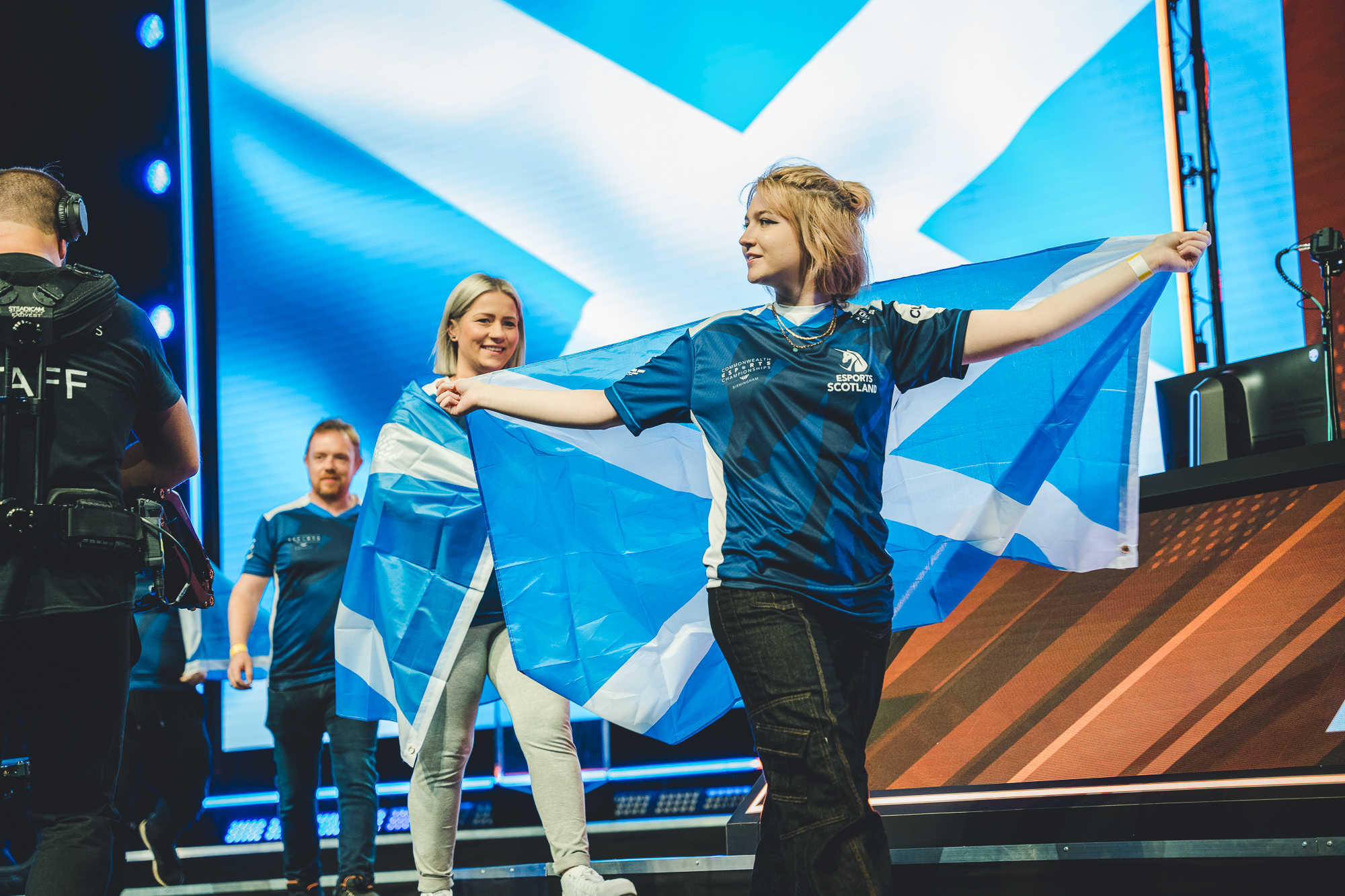 By Mark McCready21 September 2022No Comments

The pilot saw nations across the world compete in an event independent from the main programme. Teams flocked from countries across the world including Malaysia, Canada, Australia and India to England as the host nation with further countries including Ghana, Kenya, Jamaica and Singapore competing in online qualifiers.

The CEC embraced a variety of popular ‘sporty’ esports titles including Rocket League, eFootball with the addition of Dota 2, being selected to create a diverse and inclusive talent pool whilst staying relatable to more traditional sports for non-viewers to follow. The initiative set out two main categories including an Open category and a Women’s category.

In light of this news, British Esports Federation, the national body for esports in the United Kingdom, worked with GEF and CGF to help establish this event and support the development of home nation associations to participate. The development of Esports Scotland, Esports Wales, Esports England and Esports Northern Ireland created national inspiration for young people across the British Isles that esports is a recognised activity and has a place amongst sports.

In an interview with Katie Sadlier, CEO of CGF, she said:

‘We’ve done a roadmap about becoming more relevant to the future, and part of that was embracing the esports movement, and getting more technologically savvy’ and ‘What we bring to the relationship is that traditional set-up, and hopefully, we can help transform the perception of esports. We both have a commitment to sports inclusivity.’

The Esports and Sports Industries

Esports, competitive video gaming, has been a popular trend with young people over the past decade, growing in popularity year on year with a global audience of 532 million in 2022 and expected to rise to 640 million in 2025. In the UK there are growing numbers of young people engaging in esports with value being found within education after the launch of the Esports BTEC by Pearson, being followed by a new Esports NPA being launched this August by Scottish Qualifications Authority. Steps are being taken to better understand the role of health and wellbeing in esports with developments like the National Esports Performance Campus being built in Sunderland with an emphasis on player performance and impact on health.

We have seen crossovers from esports to sports with Rowan ‘Magnetbrain’ Crothers who is an Australian freestyle swimmer that won two gold and a silver medal at the 2020 Tokyo Paralympics. As a former professional Counter-Strike and Valorant player he has excelled in-game and in the pool. He has previously spoken out about the skills he has learned through swimming and in-game to have benefited him in transitioning between sports and esports, including utilising sports psychologists to improve his esports performance.

Further work is required  to understand the role esports is having on society and how it could be better utilised through its high engagement in collaboration with sports to create positive social impact.

Esports Scotland, an organisation that has been supporting the esports infrastructure, was selected to support the CEC initiative’s growth in Scotland. Well known in the industry for its national league, Scottish Esports League, delivered on national qualifiers for team selection in partnership with Dundee & Angus College at their Gardyne Campus where the national finals took place. Once national teams were selected the teams were allocated into Regional Qualifiers where they competed for a slot in the semi-finals at the International Convention Centre.

Esports Scotland successfully qualified for the Women’s Rocket League and the Open eFootball at the live event where both teams reached the final but were unable to defeat England and Malaysia for gold. Malaysia finished on top of the medals table winning the pilot with 3 gold medals at the event.

What a fantastic time at #CEC2022, as all the athletes fought to bring glory to their teams and countries. 👏

Here is the overall #esports medal count of all the teams across both days. 🥇🥈🥉

In conclusion, the event was a successful show of how esports and sports can align with one another and the similarities that comprise between the two. As the industry is growing, there are valuable lessons to be learnt from traditional sports and how the two can co-exist in the future with real benefits.

The event did come under scrutiny of its involvement with the Commonwealth games due to its relevance and governance as a new emerging industry. There was a similar backlash from the gaming and sporting communities with the Olympics ‘Virtual Sports’ event held in Tokyo 2020. The Olympic pilot was hugely criticised with its selection of esports titles not being relevant or popular with the industry. Selection for esports titles at this year’s pilot was seen as an improvement although not quite perfect as the titles were more traditional, popular titles like Dota 2 and Rocket League but didn’t include a wider range of esports categories as seen in traditional sports.

The pilot has shown that there is a strong international community including in Scotland that are keen to help provide and build upon an infrastructure that can support young people. There are already rumours of esports becoming part of the main programme for Victoria 2026 in Australia.